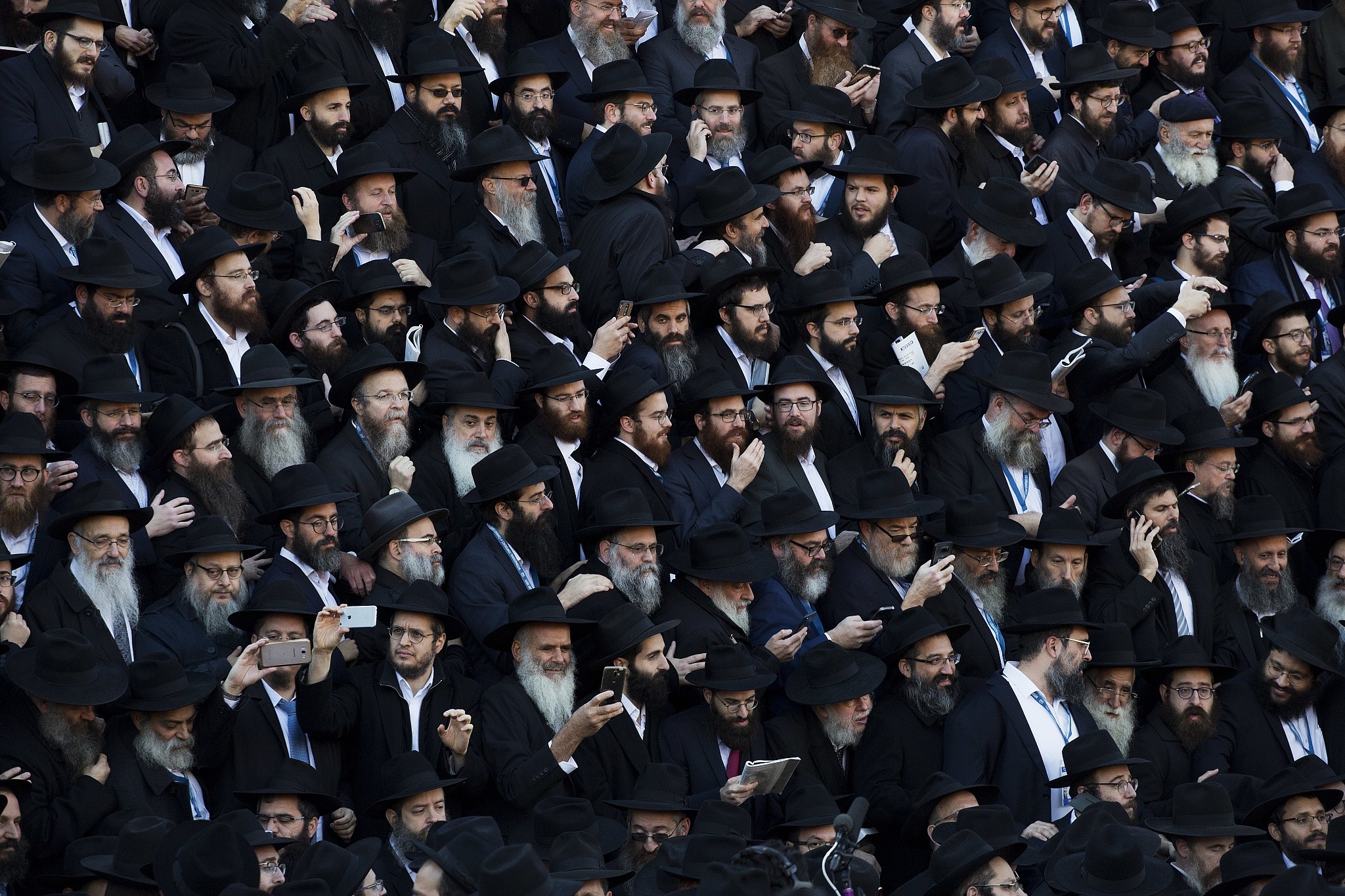 Crowds of rabbis gather for a group photo at the Chabad-Lubavitch World Headquarters, November 4, 2018, in New York.(AP Photo/Mark Lennihan)

​A Utah judge on Tuesday ordered the former nanny for a Chabad Lubavitch family to stand trial on seven felony counts for sexually abusing the eldest of the family’s children over a 10-year period.

The allegations against the nanny, Alavina Fungaihea Florreich, were brought by Rabbi Avrohom “Avremi” Zippel, a program director for Chabad Lubavitch of Utah in Salt Lake City.

Zippel, now a 27-year-old married father of two, alleged that he was sexually abused by Florreich in more than 100 instances from the time he was eight until he was 18.

First reported in the Deseret News, the case has gained attention for its rarity. It is uncommon for sexual abuse to be discussed openly in ultra-Orthodox communities, and even more unusual for a rabbi to go public with his personal experiences as a victim.

Rabbi Avremi Zippel. (Facebook)
​“I was terrified about this becoming a public matter,” Zippel reportedly said in his first public testimony in court on Tuesday. (Zippel declined interview requests from The Times of Israel.)

The #MeToo movement and the example of high-profile sexual abuse victims speaking up, namely Jewish gymnast Aly Raisman, inspired Zippel to contact the police in January 2018.

“Watching a person who had gone through so much of what I had gone through break that spell, that was the first time I thought to myself, ‘What if I could do that too?'” Zippel told the Deseret News.

After suffering for years in silence and struggling in his marriage, the rabbi finally decided to seek justice, raise awareness, and try to prevent the abuse of other children.

“This really is unusual in the sense that here is a Chabad rabbi who is going to court, making the issue public, and is not fearful,” said Manny Waks, an abuse survivor advocate and founder of CEO of Kol v’Oz, an Israel-based organization to prevent child sexual abuse in Jewish communities globally.

“Rabbi Zippel is extremely courageous in pursuing justice, especially when the percentage of convictions secured is extremely low as compared to how many children have experienced sexual abuse,” Waks said.

That being said, Waks advised keeping Zippel’s case in perspective, as it differs from others that have arisen in the Chabad Lubavitch and other ultra-Orthodox communities. Critically, the perpetrator in this instance is not Jewish.

​“The issue of mesirah, or handing a Jew over to the secular authorities, did not come into play here. Therefore, we must keep perspective on this development. It would have been harder to expose the story if it had been a Jew who was accused,” Waks said.

Manny Waks in front of Melbourne’s Yeshivah College, which has been the subject of allegations of child sexual abuse. (News Corp. courtesy of Manny Waks)

​According to Waks, who is himself a survivor of sexual abuse within the Chabad Lubavitch community in Melbourne, Australia, the community is still generally addressing sexual abuse perpetrated by its own members “in a manner akin to how the Catholic Church has addressed its own problems with sexual abuse.”

Untrue, said Chabad Rabbi Dovid Eliezrie, who reached out to The Times of Israel after initial publication of this article. Eliezrie, the director of the North County Chabad Center, said, “The tragic story of Manny Waks happened decades ago when laws and understanding of abuse were fundamentally different.”

Eliezrie said, “The community and organizational culture in Chabad actively encourages Shluchim [emissaries] and community members to report abuse to authorities. Chabad rabbinical courts in the US and other countries have issued rulings that all abuse must be reported to authorities… In this area Chabad differs with other segments of the haredi community which encourages its members not to report directly to authorities without a rabbinical review.”

Since 2012, the movement has instituted a SafetyKid program, which claims to teach “children from preschool through fourth grade what is appropriate adult behavior and what a child must reject” and offers free counseling for abuse survivors.

More recently, in September 2017, the international movement signed a proclamation calling for immediate reporting of suspected sexual abuse to secular authorities. The Guidelines for Schools includes employee conduct, guidelines for detecting abuse and neglect, and rules for how to deal with allegations of abuse.

According to court documents, Florreich allegedly began abusing Zippel a year after having been hired in 1998 by Rabbi Benny and Sharonne Zippel to care for their six children, writes the Deseret News story. The Tongan woman, then in her 40s, would usually follow the boy into the basement bathroom and abuse him there, even when his mother was at home.

Zippel said Florreich told him what she was doing was because he was mature and special, and that it would prepare him to be a good husband, according to Desert News.

Zippel claimed that the abuse continued regularly until he left home at age 13, after his bar mitzvah, to attend a yeshiva high school in New Jersey. It resumed for the next five years every time he would return home for Jewish holidays and summer vacations. In some cases, Zippel himself initiated the contact.

As is customary in the ultra-Orthodox Chabad movement, Zippel had virtually no education about his body and sexuality and did not comprehend that his nanny’s actions and the relationship amounted to sexual abuse. He did his best to maintain the outward appearance of a successful student and dutiful son, he told Deseret, all the while feeling that he was evil and at fault. He told no one what was happening, including his parents.

Rabbi Avremi Zippel and wife Sheina at a gala in Salt Lake City, May 2018. (Facebook)
​“Who knows what would happen? Would my parents kick me out? Would I go to jail? Would a rabbinic court somewhere stone me? It was that bad, in my mind, it was evil. I was the personification of evil,” he told Deseret News.

Zippel finally realized that he had been sexually abused when watching the “Law & Order” television show while laid up with a broken leg when he was 20. It was an episode about a teenage boy who believed he had had a consensual sexual relationship with his nanny. In the program, the detectives informed the boy that the nanny had sexually abused him and reassured him that it was not his fault.

Still, Zippel told no one what had happened to him.

Zippel was ordained as a rabbi in December 2013, and shortly thereafter married his wife Sheina, the daughter of a Chabad rabbi from Palo Alto, California. The couple has two young sons, who are 3 and 18 months old.

Marriage, however, was not a fix for the psychological damage that Zippel had suffered at the hands of his nanny.

Instead, Zippel fell into a depression. With the support of his wife and parents, he sought psychological counseling.

​When the rabbi told his parents about having been sexually abused by the family’s former nanny, they were stunned. They also felt guilty for having not seen the signs of their son’s distress over the years. At the same time, they weren’t initially in favor of Zippel’s going public and reporting the abuse to the authorities for fear of “a stain on the family.”

Waks is certain that Zippel is by far not the only Jewish religious leader who has been sexually abused as a child or adolescent.

“There are countless rabbis who have been sexually abused but don’t publicly admit it,” Waks said.

Waks believes that there is a good chance of the prosecution achieving a conviction in Zippel’s case, based on reported admissions made by Florreich about sexual encounters between her and Zippel.

“It is disturbing that the alleged perpetrator doesn’t view it as abuse… It leads to asking what else she might have done. Hopefully the authorities will check into that,” Waks said.

Florreich’s attorney did not respond to The Times of Israel’s request for comment.
​
Despite the fact that this case is sure to garner attention, Waks cautioned against seeing it as a major breakthrough in terms of Chabad Lubavitch’s attitude toward exposing child sexual abuse within its ranks.

“This is an individual who is seeking justice. He is not necessarily representing Chabad,” Waks said of the young rabbi.

A Chabad Lubavitch spokesman had no comment on the case, saying only that “at this point Rabbi Zippel is keeping his public comments [in Deseret News] as his final word.”

Individual Chabad members, however, have offered their public support for Zippel, including his brother-in-law Ezzy Schusterman, who responded to the Deseret News story on Facebook.

“In awe of my dear brother-in-law Avremi Zippel for sharing his raw and painful story and my amazing sister-in-law Sheina Zippel who has stood by his side through the whole journey,” he wrote.

“We all have stories that have shaped our history and who we are and who we’ve become. Living in shame and keeping it hidden only hurts you and gives the ability for the perpetrators to continue their damaging work,” wrote Schusterman.


Originally published at The Times of Israel.